Hussain Jawad has been a strong supporter of Raif Badawi from the very beginning. He was arrested earlier this year in Bahrain for his Human Rights activities for Bahraini and Saudi people. Released on 19 May, Hussain still awaits trial.

He has been constantly harassed by Bahrain for his Human Rights activities and his defense of others who need help and support. On 16 February 2015 he was arrested by police in plain cloths in a night raid. He was tortured by Criminal Investigation Directorate (CID) by physical and psychological means for several days into confessing “crimes” he has not committed. The fictitious charges related to “collecting money from Bahrain and abroad to aid and abet saboteurs”. Eventually after days of torture he signed the confession.

On 19 May he was released, but it was just a conditional release and the trial will continue in September 2015. There is another trial for other charges in November 2015. He has officially complained about his treatment and told them that his confessions were given under torture. So far Bahrain does not seem to be too interested in that. There is a real risk that Hussain Jawad will be convicted for several years in prison on the basis of the forced confession.

Please have a look at this human rights blog about him (which includes a link to an Amnesty Urgent Action) and take urgently action for him. 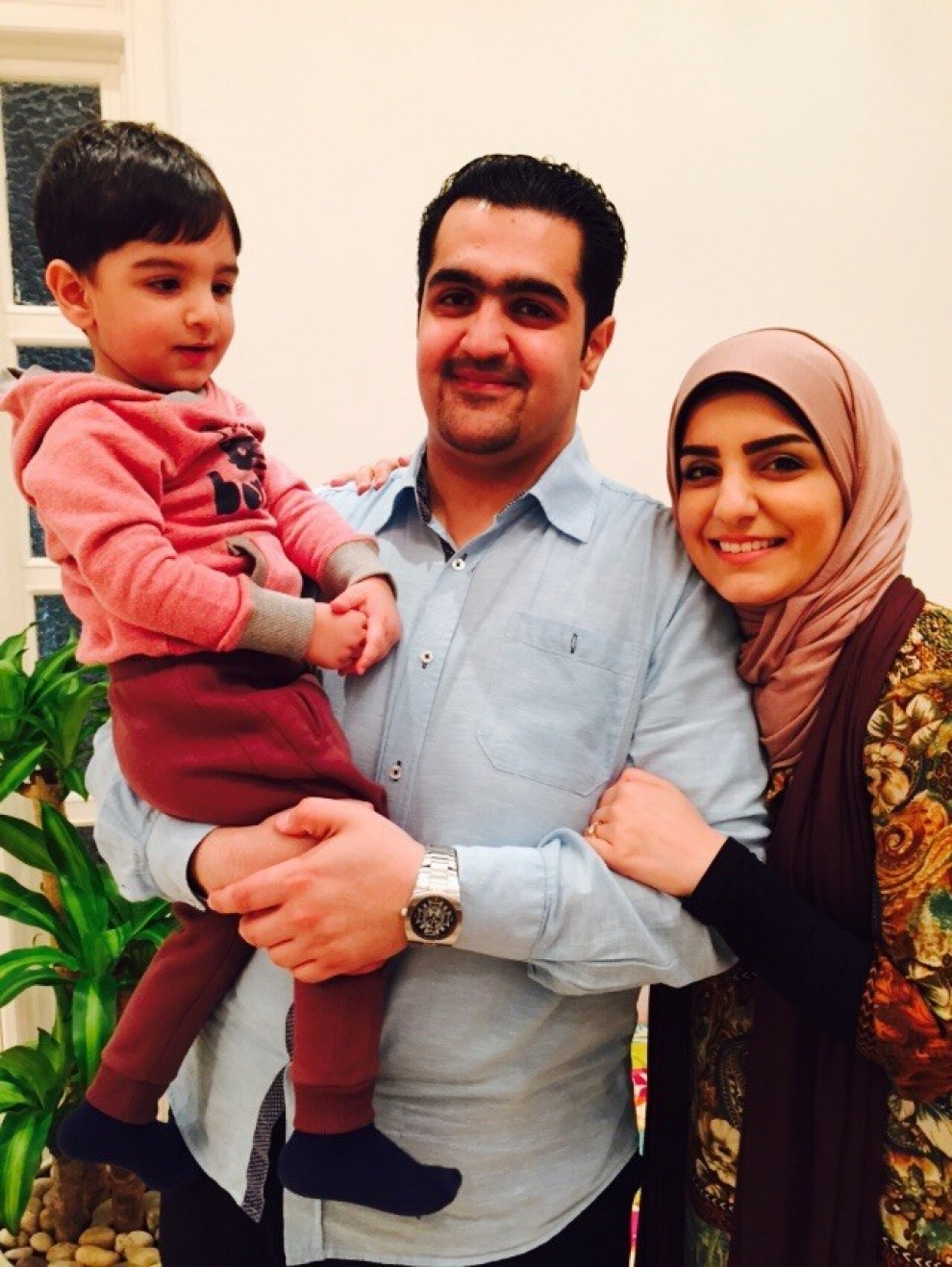 In February 2011, hundreds of thousands of people gathered at Pearl Square in Manama, Bahrain’s capital, to demand political reform and an end to sectarian discrimination. The monarchy responded with force, clearing the protesters’ campsite and declaring martial law. Activists were arrested daily. Reports of torture emerged from the kingdom’s overcrowded detention centers and prisons.

The government’s violent response to largely peaceful demonstrations turned many Bahrainis, including me, into activists overnight. I went on a hunger strike for 12 days after my brother was arrested for taking part in the Pearl Square gathering. In June I staged a sit-in inside the United Nations office in Manama with activists Zainab al-Khawaja and Sawsan Jawad. We were promptly arrested.

I met my future husband, Hussain Jawad, during those tumultuous days. He was a prominent human rights activist known for his impassioned speeches calling for government reform. On the day I was arrested, he phoned the U.N. in New York continually for six hours demanding my release.

After authorities released me, we became friends and colleagues. Soon he confessed that he had more than just a professional interest in me. In late June, he asked me to marry him. I spoke to my father, who knew of Hussain and his family’s history of civil rights activism. When Hussain visited my home, my father told him that he was the man he wanted his daughter to marry.

Less than a year after our engagement, we founded the European-Bahraini Organization for Human Rights, where I serve as the head of information and media relations and Hussain is the chairman. We got married on Sept. 9, 2011. Given the ongoing protests in Bahrain and our chosen commitments, it was difficult for us to prioritize our wedding.

We built our marriage and our human rights group at the same time. He is an incredibly hard worker. In the beginning, I was jealous over how much time he spent on the phone with victims and their families. Sometimes at night when he thought I was sleeping, he would even sneak out of bed to continue working. Knowing I was upset, Hussain said to me, “Imagine that the next time I am arrested, you reach out to a human rights defender for help and they do not take your call. Imagine they turn you down. I won’t allow it, not for you or any family. This is why I work all night.”

In February 2013, I gave birth to a son, Parweez. He was diagnosed with a life-threatening heart condition when he was 4 months old and underwent months of treatment to prepare for surgery.

Hussain was arrested in November of that year for a speech he gave to a large crowd in Manama earlier that month, in which he had urged Bahrainis to continue their peaceful protests. He was charged with inciting hatred against the regime and insulting the monarchy.

After 46 days in detention, he was finally released, though he still faced charges. He feared that our home would be raided next. In an attempt to protect our family, he fled the country and moved to London for eight months.

He applied (unsuccessfully) for asylum in the United Kingdom and continued to advocate for political reform from abroad. I cared for Parweez during months of hospital visits. Via a spotty Internet connection and a series of pictures sent through WhatsApp, Hussain watched our son’s health deteriorate.

Hussain came to feel that staying away from his country was worse than being in prison. He finally returned in August of 2014, weeks after Parweez’ last surgery. He did not fear arrest in Bahrain but was terrified of the return of night raids that we would have to endure because of his presence.

He was right to be worried. Our home was raided at about 1:30 a.m. on Feb. 16. He was kidnapped by masked men in civilian clothes. They confiscated his cellphone and passport. Holding Parweez, I watched as Hussain was taken away and put in a van waiting outside. He would later tell me how the officers took turns calling him a donkey, dog and cow, alternating between cursing Geneva and human rights defenders and his religious sect. For more than nine hours, the officers denied his requests for a bathroom as they drove him around the island.

Later that day, I was finally able to speak to him briefly by phone. I asked him if he had been harmed, and he said yes. Then the phone line went dead.

Hussain later confirmed that the Criminal Investigations Directorate (CID) tortured him physically, sexually and psychologically before he was transferred to the public prosecutor. The CID uses torture to elicit false confessions from innocent activists. He initially denied all charges against him, but the abuse continued, including threats against our son and me. During a subsequent interrogation, he admitted to “collecting money from abroad and Bahrain to aid and abet saboteurs.”

Since Hussain was kidnapped, I have noticed his WhatsApp status change to “online” numerous times. I suspect that someone at the CID is looking through Hussain’s phone and reading his messages. In fact, when Hussain last called home, he told me how the CID staff mockingly congratulated him on his “perfect marriage,” reading aloud our private messages.

On Feb. 24, I laid out Parweez’s best clothes in preparation to see Hussain. The next day, we arrived at the prison an hour early for our scheduled visit. We were granted 25 minutes with him, separated by a glass barrier. He appeared exhausted and had visibly lost weight. He complained about pain in his eyes as a result of being blindfolded and in his legs and back due to continuous standing when he was detained at the CID.

He was taken to the public prosecution on Feb. 26, but as I feared would happen, he was detained for another 15 days, pending further investigation. His scheduled court appearance for his earlier case has been postponed.

I have been separated from Hussain either by prison walls or an entire continent for nearly half our marriage. When he is in prison, I drive by it and think about why we’re separated and what’s at stake. The absolute power of Bahrain’s government over our people means they can take my husband from me and our child’s father from him in the middle of the night without explanation.

Hussain is a kind husband and a wonderful father. I want him back.

Editor’s note: Asma Darwish wrote this op-ed with the help of Erin Kilbride.
Asma Darwish is the head of information and media relations at the European-Bahraini Organization for Human Rights. She is married to its chairman, Hussain Jawad, and is the mother of 2-year-old Parweez.